LOADS of announcements here… Please shared & tag your friends so everyone sees it!

First up… OUR AXES SHOW IS FREE ENTRY.

In light of the recent Wiltshire Times article about the future of Town Hall Arts (summery – Victim of their own success, require “35k to survive, 60k to thrive” in funding) we decided that the line up of AXES (multi-nationality & gender) some what reflected the diversity that the Town Hall Arts is all about, and thus have made our event FREE ENTRY in an attempt to fill the venue to bursting with like-minded individuals.

Re-cap on what the show is all about, Axes are signed to Big Scary Monsters, whose roster has a long and beautiful relationship with performing our shows. The band themselves are an art rock band, with crazy time signatures, structures and dynamics all over the place. Real fun, feel good, dancy, indie rock noise, with silly song titles (Wet Wet Wet Wet or Rainbow Bacon or Fleetwood Math etc).

Support comes from Wiltshire’s own art rock band, Hoggs Bison, who is none other than Tom Mallard from Chippenham’s Riverbank studio. The band have put out their own debut album on vinyl, titled “Aeons” and last year performed at math-festival “Arc Tan Gent”. Following in the footsteps of previous Wiltshire outfit, Thought-Forms, it’s fair to say we have a strong history of producing this sort of quality & long may it continue!

ALL ROADS LEAD TO fROME! still… That’s right, Somerset council haven’t changed any of the sign posts around, so indeed all roads do still lead to Frome.

We, very quietly announced last week that, Scout Killers, All Ears Avow, Drew Bryant, She Makes War & Rob Lynch were added to our line up – In case you missed that announcement, and many of you did, here’s the new again.

I cannot stress how difficult it was to tie up some of these sought-after acts. Rob Lynch is a slippery salmon, but credit to Rob Dahl for chasing him like some sort of 90s pop fan. He didn’t manage to scare Lynch away, like say, Dan Buckingham would have, and instead agreed to come play instead.

It’s also with great admiration that we include Scout Killers on the bill. The band recently sold out successively larger shows at Village Pump in Trowbridge, followed by The Nest in Bath. We’re predicting big things for the band, who only inked a deal with American band Soil’s Ryan McCombs management agency & are set to make a further leap when their album is recorded in June, and released later this year. It’s great to see some of our talent breaking out, so do keep a lazy eye on this band.

I’m tickled pink that Laura She Makes War has also agreed to the gig, joining her friends Barry Dolan aka Non-Canon and Ben Marwood on an already excellent bill.

Rob & I have been very lucky over the past two years that the bills do get better, fingers crossed this year we’ll beat out previous records. The line up speaks for itself.

OK, so you kinda get it by now, Chuck SJ Hay is great. They’ve done some amazing gigs for us, and they’re someone we really believe in. But we can’t simply keep giving the same show over and over, at some point something has to give, so we’ve made the decision to add Chuck to the Justin Sullivan show at The Vic in Swindon. Much like the recent Grace Petrie gig, Chuck will play an early set, which won’t affect the other acts or times.

Chuck really is someone coming into their own. Confidence seems to grow in the performance and there is a real message there. So far the gigs have managed to turn new people on to their music and things are definitely coming together for this Brighton based artist! A couple of high-profile supports and we could see Chuck develop into a real regular on this circuit. I predict that they’ll be opening Gaz’s Xmas shindig in Bristol in 2019. I’m calling it now.

OH and one last thing…

After recently seeing some wicked enamel pin badges, I’ve decided to produce some Sheer ones. Very simply, they say “Sheer Music est 2004” round the outside, and #GigFamily on the inside & will look amazing! Rob Escott (who does most of our posters) is mocking us up a design (when he get 5 minutes for my slave driving…)

I did hope they would be ready in time for the Axes show, but alas the turn around is 4 weeks, so I’m way out. However, they will be beautiful and a perfect summery of what we’re about – a big family of gig lovers and friends. Defying age, gender, religious or sexual barriers, live music and our shows are joyous spaces where we come together to have fun together & I can’t think of anything more beautiful than that. So this is a pin badge to celebrate that!

You invented the #HashTag, I just ran with it!

SEE YOU ALL AT THE AXES SHOW & don’t forget to pick up tickets for All Roads Lead To Frome (please!) 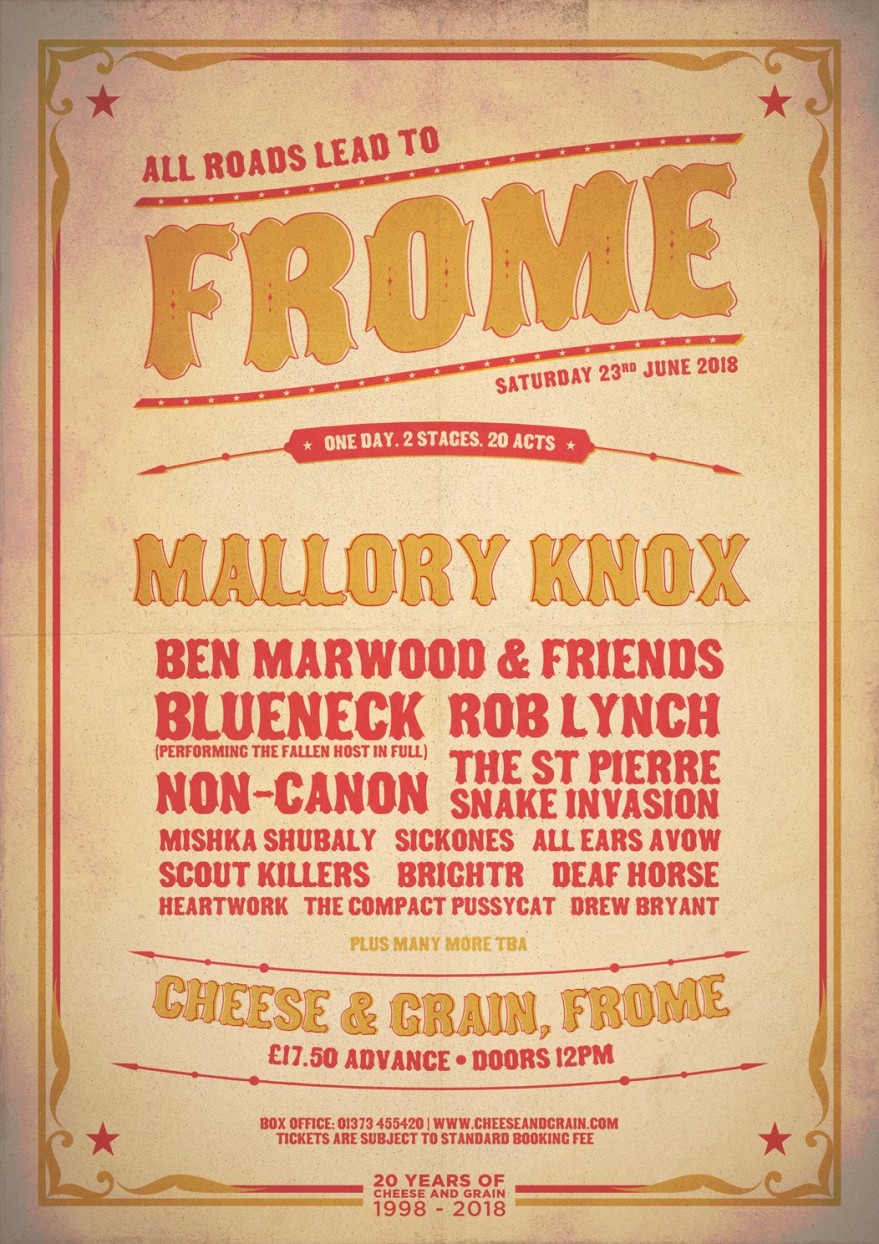 That doesn’t seem right, does it? Gaz Brookfield the self proclaimed “land pirate” who has toured (probably) every town in our fair isle, and was based in Wiltshire for a decade or so, has yet to make an appearance in our county town?!?!

Yet my fellow compadres this is the case. Gaz has never performed in Trowbridge. Never at the Village Pump, or Stallards or even the White Hart. So now on his 5th studio album, his never-ending tour finally rolls into Trowbridge at the Town Hall Arts. Bypassing the usual pup gig entry level show you have to do when visiting a new town, Gaz jumps straight to the top of the pile, in what is arguably our nicest small venue.

Previously in this room we’ve hosted Chris T-T, Mark Morriss, Professor Elemental and coming up we have Mr B the Gentleman Rhymer, Axes and Levellers front man, Mark Chadwick – who has previously personally invited Gaz to tour with him, so we’re very much becoming a member of that scene and establishing Town Hall Arts as a venue of choice for these sorts of artists and shows.

As you would expect, tickets have been strong for this gig, despite it being on the unlucky day of Friday the 13th.

You can still pick up cheap advance tickets over at WeGotTickets – We’ve seen the pre-sales and I am delighted that I know so few of them – This is going to be a totally new crowd to Sheer, to our shows and what we do, in an amazing venue and space, with amazing support in the shape of Chuck SJ Hay.

Chuck has played for us only a handful of times, but they’re an absolute talent. We haven’t seen anyone play acoustic guitar  quite so aggressively since Oxygen Thief. They’ll play a lot of angry protest songs, about gender, equality and society at large.

THANK YOU FOR SUPPORTING ORIGINAL LIVE MUSIC – This is just the beginning Trowbridge, please get involved now.

Once again I am over the frickin’ moon that we’ve managed to get a band of this calibre to Wiltshire. It feels even better to say County Town of Wiltshire AND the number #1 Most Up-and-Coming-place-to-live. Obviously because of all the cool shows. Natch.

AXES are the embodiment of fun. Furiously fast guitar work, bouncy fun rhythms and just a glorious cacophony of noise. Their last album, “Glory” says it all. On the cover they’ll all riding horseback. Horseback. I’ve run out of superlatives. They’re great if you like loud fun music.

Support for the show will be Bristol / Chippenham / area poly-rhythm band, HOGGS BISON.

You’ll remember them for their support slot to Alpha Male Tea Party at the Village Pump last August as a warm up to ArcTanGent, apt then this show is a warm up tp math festival Portals then.

Their debut album “Aeons” was marvellous and I’m proud as hell that we have musicians like this, following in the steps of Thought-Forms to showcase Wiltshire as a hotbed of experimental music.

Tickets for the show are available through TicketSource, WeGottickets or direct from Town Hall Arts. 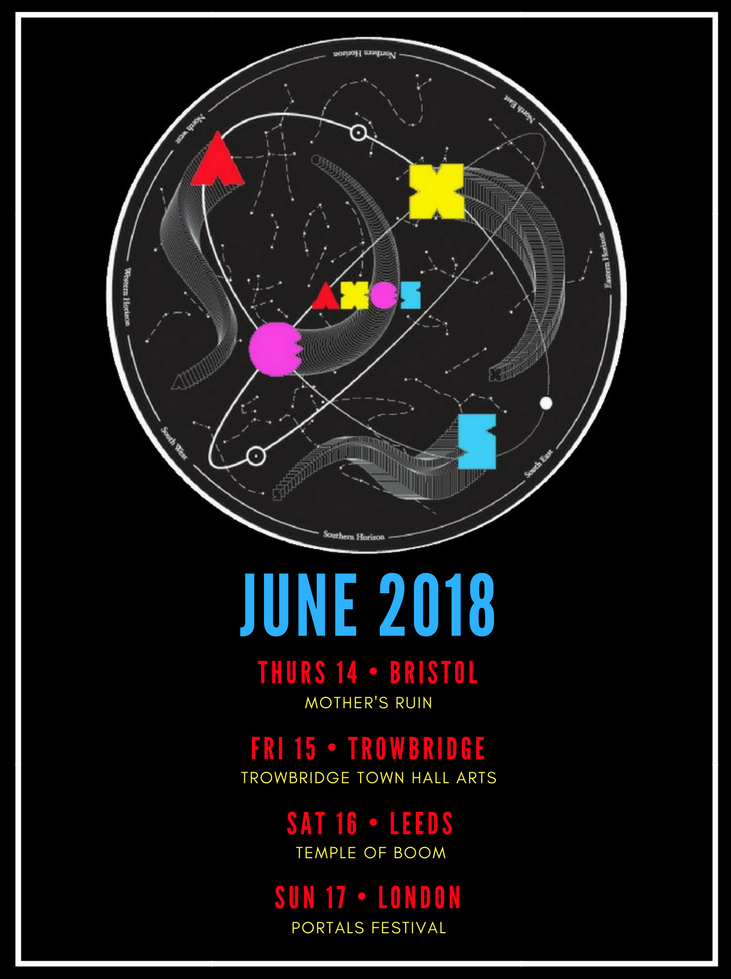